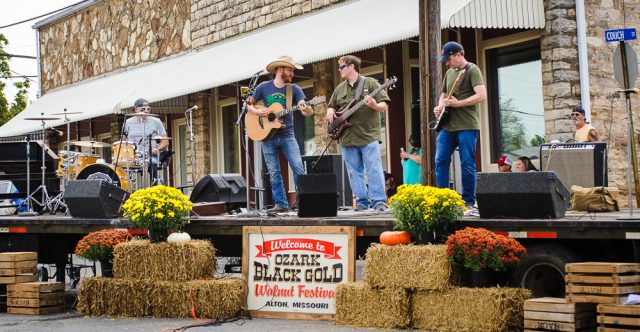 Alton, Mo. – This year at the Black Walnut Festival in Alton, Missouri, there were several bands that played, sponsored by various businesses of our community. The Alton Elementary Choir, Alton Junior High, and High School Choir all came up before noon to give some brief entertainment. After lunch, T-­Bone and Eli, Cody Noel & The Honky Tonk Heroes, and The Baker Family performed on stage, providing music for everyone all day.

At 9:45 a.m., the Alton Elementary Choir went up to the stage to perform- much to the delight of their parents and embarrassment to themselves. After the elementary finished, the Alton Junior High and High School Choir performed for the crowd as the sound system got all set up for bands that would play later in the day.

At 1 p.m. T-­Bone and Eli, sponsored by Young’s Produce, got on stage to entertain the crowd for one of the busiest times of the day.

At 2 p.m. Cody Noel & The Honky Tonk Heroes, which were sponsored by the Alton Bank, took over, playing some of their favorite songs while families sat on the hay bales and listened.

The last band of the day was The Baker Family, Sponsored by Century 2, and Harps Grocery. The Baker Family got on stage at 3 p.m. and provided some excellent music until 4 p.m. when almost everyone at the festival was packed up, and the square was, once again, vacant.