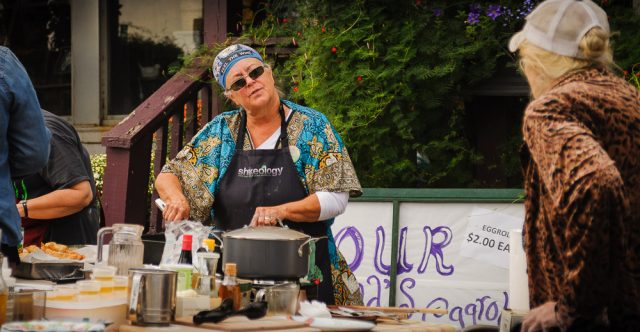 Taking an order of eggrolls.

Alton, Mo. – Is a festival really a festival if it doesn’t have some food vendors? At the 34th annual Black Gold Walnut Festival, there was a variety of food vendors, set up with booths or their trailers, around the square. Everything from sandwiches, to ice-cold lemonade, was sold, filling the air with good smells and completing the festival experience.

Alton Missouri’s annual Walnut Festival was in full speed by 10 a.m. on October 5. Booths had already been set up, before the sun even hit the sky that morning, vendors happily waiting on the crowd that was growing as the day passed. With those vendors were several booths selling foods and drinks. There was ice cream, Chinese food, sandwiches, and other goodies around the square.

People enjoyed being able to stick around and get some food at the festival instead of going home for lunch. Of course, there were some stands, like Spring Dipper, which had a continuous line of business, from sun up until he packed up.