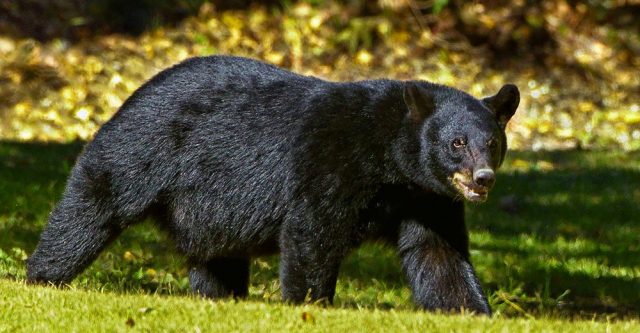 A bleak bear walking in grass.

Missouri has about 800 black bears, of which most are in the southern portion of the state, according to the Missouri Department of Conservation (MDC). The spring is officially here, and these mammals are leaving their winter dens in search of food. The MDC urges Missourians to “Be Bear Aware.”

Black bears are actively seeking food in spring, when they become active. It is in the interest of everyone to keep areas free of attractants so bears can find natural foods on their own. If you come upon a bear, leave it alone and enjoy your sighting, but don’t feed it.”

Bears can be dangerous when intentionally fed because it makes them comfortable around people, according to Bowersock. As a result, bears may cause significant property damage while searching for a meal.

The MDC’s Wildlife Damage Biologist Josh Wisdom explained that bears that lose their fear of humans can approach people in search of food or become defensive about food sources or territory they associate with humans, making them dangerous. In such cases, the bear has to be killed and cannot be relocated. Feeding a bear is the same as killing it.

The most important motivation for a bear is food, however, it can also be the source of conflict. Black bears can be deterred from approaching food sources by following these tips from the MDC:

On the other hand, it is best to be pro-active and defensive with any bear you may see. Make loud noises and travel in groups when outdoors. Keep dogs leashed. Be aware of your surroundings and any bear signs. For additional information, visit the MDC bear site here.