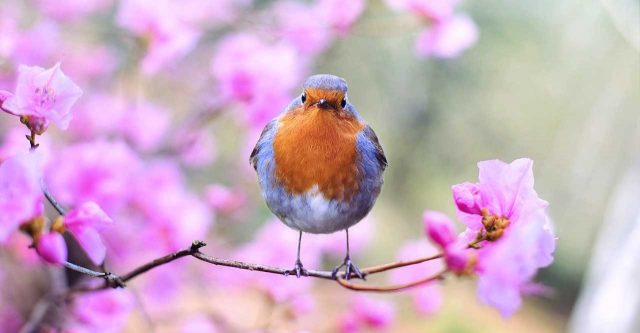 Robin sitting on a cherry branch.

In case the only things you know about Groundhog Day comes from the movie “Groundhog Day,” we compiled a little backstory about the holiday and Punxsutawney Phil himself.

Groundhog Day is celebrated on February 2nd each year, and according to an old tradition, when the groundhog sees his shadow, we’re in for six more weeks of winter. But if he can’t find his shadow, then we get an early spring.

According to the History Channel, the first Groundhog Day was celebrated in 1887. It came from a winter tradition where a church clergy would hand out candles to last through winter and, depending on the number of candles, was how soon spring would arrive. [1]

Germans then began to predict the weather using a hedgehog but later used a groundhog when they came to America. In 1887 a group of groundhog hunters, the Punxsutawney Groundhog Club, claimed that Phil, a groundhog they had caught, was America’s only true weather forecasting groundhog.

In February of 2019 Phil, the groundhog, did not see his shadow. This is only the 19th time out of 123 times that he hasn’t seen his shadow. According to legend, this means that spring is on the way and we won’t have to wait six more weeks until winter is finally over.

Even though Phil didn’t see his shadow, don’t get your hopes up. Phil is normally wrong when it comes to forecasting weather. [2]

And, even more, unfortunately, the fact of the matter is, whether or not Phil sees his shadow, we get six more weeks of winter. Spring arrives March 20th.