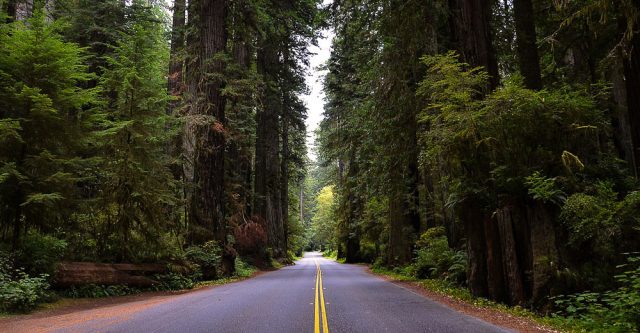 A lone road driving thru some Giant Sequoia trees.

On October 1, 1890, Congress created the Yosemite National Park in California. President Harrison signed it into law to save the area for generations to come to view and enjoy the beauty of the giant sequoia trees.

History Of The Land

Native Americans lived on the land until 1849. At that time, gold rushers settled in the area searching their fortunes.  With them came tourists. Fearful of exploitation, President Lincoln declared Yosemite Valley and the Mariposa Grove of giant sequoias a California public trust [1]. This is the first time land is set aside for public enjoyment by the U.S. government. In subsequent years, domestic sheep threatened to destroy the lands surrounding the trees. John Muir lobbied for the meadows surrounding Yosemite Valley be included in the government protection. By 1890 Congress set aside an additional 1,500 square miles to become Yosemite National Park [2]. In 1906 this entire area came under federal jurisdiction.

Size Of The Park

Yosemite National Park contains 1,189 square miles. this is roughly the size of Rhode Island. It contains thousands of lakes, ponds, streams, walking trails, and roads. On average, approximately 4 million people visit the park annually [3]. It is open year around, but call ahead for forest fire dangers in the area. At peak times, you may need a reservation before entering the park. Some visitors even camp and backpack overnight. A highlight for visitors is the 2,425- foot-high Yosemite Falls, which is one of the world’s tallest waterfalls.

Ansel Adams spent much time in the park photographing the sights. He preferred black and whites and used the images in the cause of wilderness protection [4].