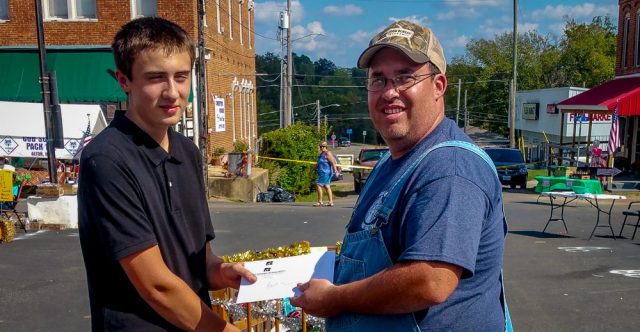 Winner of the bed race accepts prize from Zach Barton.

Alton, Mo. – The Black Gold Walnut Festival held its second annual Bed Race. After one month of advertising of this exciting event, the few spectators still around watched eagerly. Temperatures neared 90 degrees as the 2:00 pm race time approached. Undaunted by the heat, the contestants removed the bed from their truck and set it up. Although only one entry, the contestants were not dismayed; it could be a sure win if the bed holds together.

Why are we Doing This Again?

For Prizes! Prizes had been announced for the first, second, and third place winners. The best-themed bed winners would also receive an award. Zach Barton from Missouri Farm Bureau headed up this event and awarded the prizes.

The rules to participate in the race were simple: one bed on wheels, 3-4 people pushing and guiding the bed, and one person in the bed. The bed needed to make it through the race.

And the Winner is…

The winner of the race was Curtis Thomas and his crew. After working diligently on the bed, adapting it with wheels, getting decorating helps from his sister, he was ready to enter the competition.  He persuaded his brother and two sisters to aid him in the race. With smiles all around, this family pushed the bed through the course. Although discouraged at the turnout, Zach kept his word and awarded the prizes. After winning, Curtis and his younger sister, Amanda, paraded the decorated bed around the square, providing ideas for future entrants in bed races. 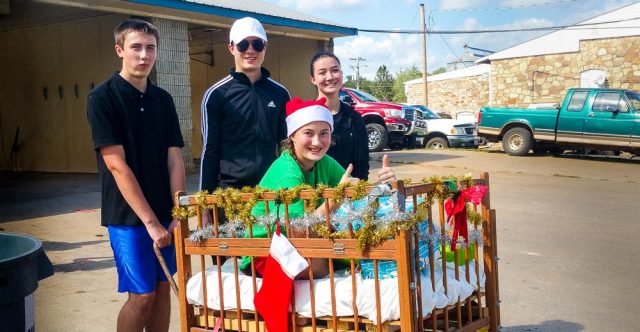 Curtis had the bed decorated with a Christmas theme. Garland, presents, stockings, and a tree completed the motif.  When questioned, Curtis remarked that as the work went along, more and more ideas came into being. He is already looking forward to the third annual bed race as the reigning Bed Race Champion.