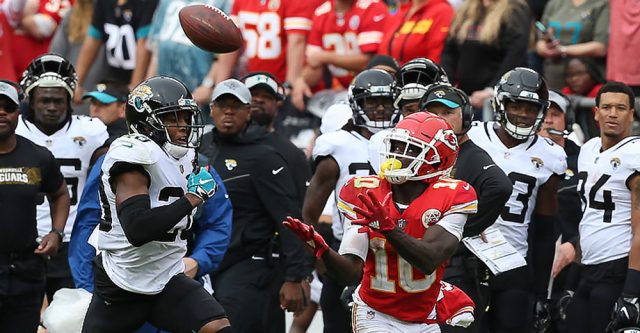 The number one offense versus the number one NFL defense led to a surprising finish. On October 7th the Kansas City Chiefs swept the Jacksonville Jaguars off their feet with a 30 to 14 victory.  What had been a highly anticipated match of skills turned out to be somewhat of a disappointment for Jaguar fans when halftime struck with the score at 20 to 0. With the Chiefs in the lead. In other words, the number one defense could not hold up against the number one offense.

Patrick Mahomes ran for a five-yard touchdown on the Chiefs first drive. Mahomes also experienced his first interception during this game, halfway through the second quarter. This high throw to Tyreek Hill ended up breaking his interception-free passing streak. He failed to get discouraged by this though and ended the game with 313 passing yards and 22 out of 38 completed passes.

Jordan Lucas, a former Miami Dolphin, briefly stole the spotlight in this game by intercepting a pass made by  Jaguar quarterback, Blake Bortles, at the beginning of the fourth quarter. Lucas snagged the ball from the red zone and took it to the midfield. He displayed impressive evasive maneuvers as he weaved in and out of the Jaguars’ defense for a 49-yard return.

The Chiefs Defense Stepped Up

The game seemed like a sure victory for the Chiefs when the Jaguars made their first touchdown three minutes from the end of the third quarter.

Kareem Hunt made a touchdown in the first play of the fourth quarter, giving the Chiefs a 23 point lead. Then the Jaguars fought the gap between the scores with another touchdown less than 6 minutes from the end of the game. This brought the final score to 30 to 14, making the Chiefs undefeated so far with a 5-0 winning streak.