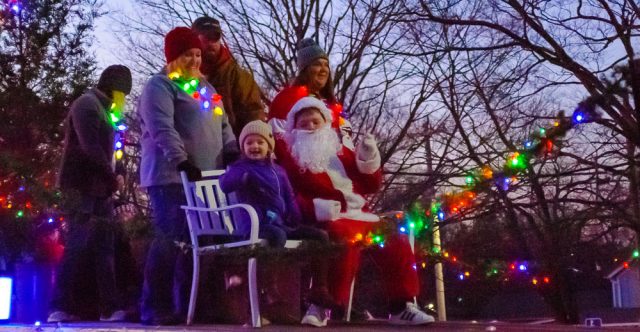 Santa has a new sleigh this year.

Christmas is just a couple of weeks away. A way people spread Christmas cheer is by having Christmas parades. Cities in Oregon County, Howell County, and Arkansas have planned Christmas parades for locals to attend on December 2nd, 3rd, and 10th.

Alton is having their Christmas parade on Saturday, December 3, 2022, with the festivities starting at 4:30 pm. The parade itself will begin at 6:00 pm. The Christmas pageant will be at 4:30 along with the lighting of the Christmas tree. If you want to be in the parade, just show up at the school!

Thayer is also having their Christmas parade on December 3rd, but there’s will be at 2:00 pm. The theme is “Santa’s Workshop.” Local bands will perform at the parade. The crowning of Thayer Mr. and Miss Christmas will follow the parade at Whistle Stop Stage. To have a float at the parade, call Scott Cecil at 417-264-7324. [1]

Summersville Chamber of Commerce has planned its annual Christmas parade. It will be on Friday, December 2, 2022, at 7:00 pm. The theme is “Gingerbread Houses.” The parade line-up begins at 6:00 pm at the corner of 106 and Cherry Avenu. Prizes will be awarded to the floats.

Mammoth Spring will follow Thayer’s Christmas parade on December 3rd at 6:00 pm. The theme is also “Santa’s Workshop.” For a float, you can contact Trena Spears at 870-371-0848.

West Plains will not have its parade on the 2nd but will have it on Saturday, December 10th at 4:00 pm at the corner of Porter Wagoner and Webster Street. The theme for this parade is “Christmas Memories.” Prizes will be awarded to the grand prize, commercial, religious, and miscellaneous floats. For more information or entry forms, call the Chamber office at 417-256-4433 or email info@wpchamber.com.