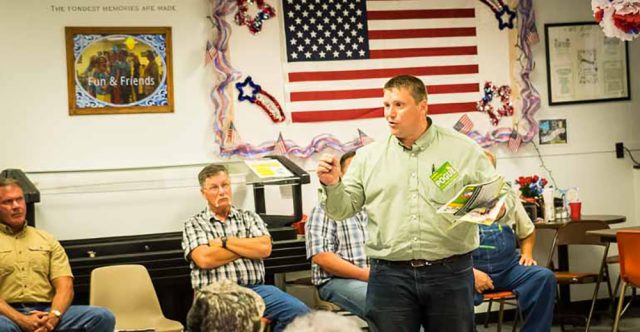 government is too big, spends too much and it’s going the wrong away.

“I’ve stood up for Missouri taxpayers and voted for Missouri Senate bill 509. That lowered taxes for ALL taxpayers.” Mr. Pogue said. He also reminded the audience that he had introduced some bills to help taxpayers too.

Mr. Pogue referred to his predecessor, Mike Dethrow, saying that Mr. Dethrow used to say, “the first job of a representative to always protect the rights and dollars of the taxpayers.” When speaking of his record concerning his actions that he felt protected his constituents, he stated, “And further, I have fulfilled that promise”.

Pogue wrapped up the debate reminding voters that he, “ran 4 years ago because government is too big, spends too much and it’s going the wrong away.” Further, he promised that he would “continue to push a constitutional, conservative, christian, pro-gun , pro-family, pro-traditional-marriage, common sense legislation and protecting your rights.” He was met with applause when he said, “I would be honored to represent you”.