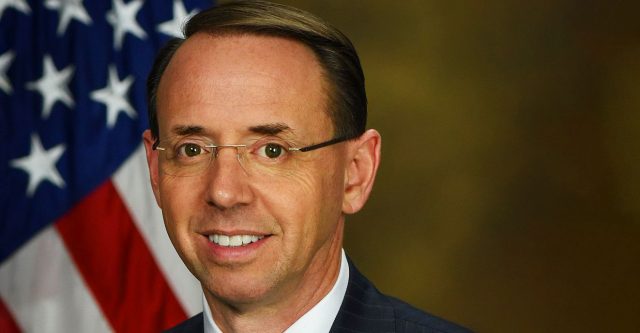 U.S. Deputy Attorney General Rod Rosenstein is expected to leave his role in a couple of weeks according to ABC News. Rosenstein appears to have been thinking about only serving for two years before retiring.

“Sources familiar with his [Rosenstein’s] plans” told ABC News that he’s planning on leaving his role as Deputy Attorney General in the coming weeks. [1] Rosenstein has already notified President Trump and other White House officials of his departure. Rosenstein will be leaving around the time President Trump’s nominee for attorney general, William Barr, will take office. This will be after William Barr’s Senate confirmation.

Although Deputy Attorney General Rosenstein has said he only wanted to serve about two years and that he wants a smooth transition to his successor, there has been tension between him and President Trump.

Rosenstein has been accused of talking about secretly recording the president at the White House in the past. He met with then-FBI attorney Lisa Page and then-acting FBI Director Andrew McCabe a week after President Trump fired former FBI Director, James Comey. They took his remark on recording the President seriously, and although there was some discussion about whether anything would happen to Rosenstein, nothing occurred.

After James Comey was dismissed, Rosenstein was reportedly so upset at the White House for pinning it on him that he was on the verge of retiring.

Rosenstein did not retire, however; a week later he assigned Robert Mueller as special counsel to “oversee the previously-confirmed FBI investigation of Russian government efforts to influence the 2016 presidential election and related matters.” [2]

When he had his confirmation hearing to become deputy attorney general, in March 2017, Rosenstein told the Senators that he would resign from his post if he felt he was inappropriately pressured to influence an investigation.