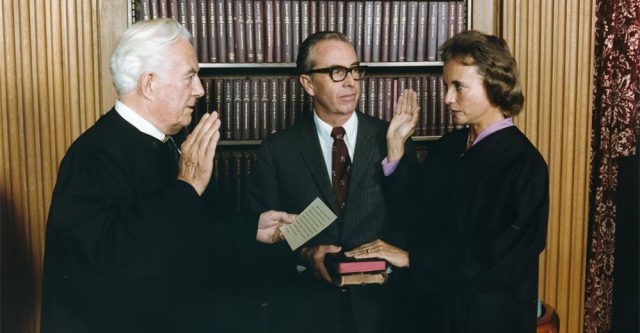 Photograph of Sandra Day O'Connor Being Sworn in as Supreme Court Justice by Chief Justice Warren Burger, Her Husband John O'Connor Looks On, 09/25/1981

Sandra Day O’Connor, the first woman to serve on the U.S. Supreme Court, announced that she was told she has dementia. Former President Ronald Reagan appointed her to the Supreme Court in 1981 and served as the first woman on the Court until she retired in 2006 due to wanting to spend time with her husband who was then suffering from Alzheimer’s disease.

Sandra O’Connor wrote a brief letter to Americans stating that she was diagnosed with dementia and wishes to step out of public life. She continued saying that she was thankful for the many blessed opportunities she has had in her life.

“Since many people have asked about my current status and activities, I want to be open about these changes, and while I am still able, share some personal thoughts,” Justice O’Connor wrote in the letter. “While the final chapter of my life with dementia may be trying, nothing has diminished my gratitude and deep appreciation for the countless blessings in my life.” [1]

New York Times shared an article on Sandra Day O’Connor, talking about some of her accomplishments in life and the role she played in some memorable cases. She went to Stanford Law School and finished 3rd in her class, became a State Senator in Arizona, was the chancellor at College of William and Mary, and created iCivics, something to educate people through games and lessons. She voted to uphold Roe v. Wade, voted against certain bans on late-term abortions, was the swinging vote for Grutter v. Bollinger, a case of the University of Michigan’s use of race as part of its school admissions.

She was politically savvy — and showed it off during her Senate confirmation hearings. She gracefully danced around politically dicey questions from senators but made a point, on national television, of noting their commitments to reduce crime and fix overloaded federal courts. [2]