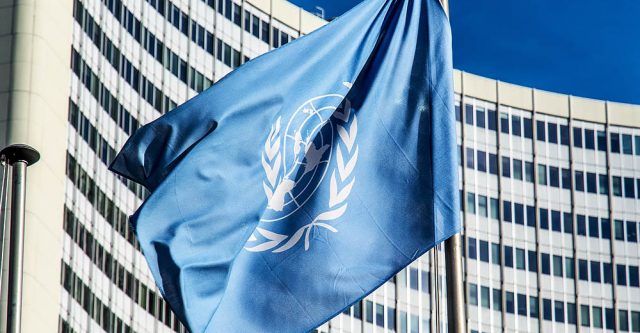 U.N. flag in front of building.

On Saturday Syria’s Deputy Prime Minister Walid Al-Moualem addressed the 74th session of the United Nations General Assembly, demanding that all foreign forces within their country should withdrawal immediately, saying that they reserve the right to take action if foreign military remains.

“The United States and Turkey maintain an illegal military presence in northern Syria.” al-Moallem told the annual U.N. General Assembly on Saturday morning. “Any foreign forces operating in our territories without our authorization are occupying forces and should withdraw immediately.”

“If they refuse, we have the right to take any and all countermeasures authorized under international law,” he said. [1]

Earlier this week the U.N. secretary-general announced that a committee had been formed that would begin drafting a new Syrian constitution- something that has long been in the works.

Syrian President Bashar al-Assad cracked down on pro-democracy protestors eight years ago, leading to a long and tumultuous civil war in Syria since then. Although Assad has been backed by Russia airpower in his offensive in the Idlib region, in northeast Syria, rebels still control a significant chunk of the territory. Western states have repeatedly accused Assad’s forces of targetting their civilians in northwest Syria instead of the insurgents, causing unrest in the west.

The Holy See has been recommending that the world “put an end to the suffering of so many people” and remove the foreign military from the country. The Vatican’s secretary of state, Cardinal Pietro Parolin, also spoke of the conflict between the Israelis and the Palestinians as “an area of perennial concern.” [2]

“We are determined to continue our war against terrorism in all its forms until rooting out the last remaining terrorist,” al-Moualem said.