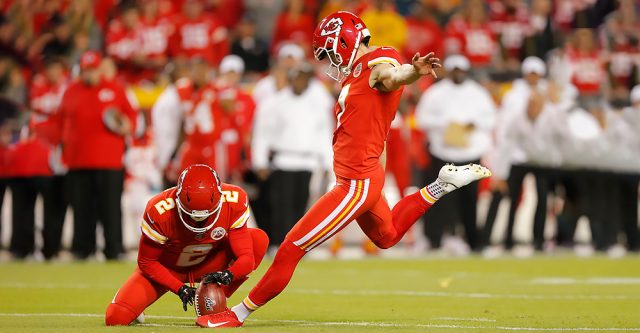 Kansas City, Mo. – The Kansas City Chiefs kicker, Harrison Butker, was named AFC’s special teams player for the month of November. Butker has had a good season so far, and it doesn’t look like he’ll let up, having proved his worth to the Chiefs on several separate occasions.

Special Player of the Month

https://t.co/mEouPS4uUo had himself a month!

This season Harrison Butker is 25 of 29 on field goals and is 37 of 39 on extra points. Butker joined the Chiefs in 2017 and signed a 20.3 million contract extension the summer of 2019 for five years, so far he’s been worth the million-dollar price tag for the Chiefs.

Getting a Kick out of It

Harrison Butker was the hero for the Vikings game- Butker tied the game with a field goal at 54-yards, a career-long field goal. The game was tied 23-23, and with just three seconds left for the game before it would go into overtime, the special teams took the field. It was a 44-yard field goal, and Harrison Butker made it and won the game 26-23.

Butker also made an impressive field goal during the Raiders game on December 1, which the Chiefs won 40-9. It was made in the second half, from 50-yards away, directly into a strong wind- causing many to doubt his ability to make it. Butker made the goal, however, helping the Chiefs win the game.

Butker also has a website that tells a little about him, and if you click anywhere, you will be taken to the game-winning field goal against the Vikings. You can view it here.