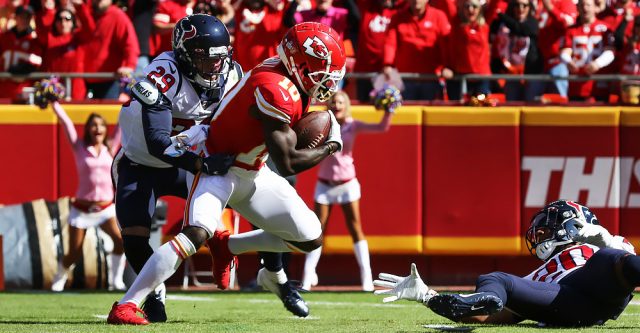 Kansas City, Mo. – The Kansas City Chiefs lost by 7 points in their home game against the Houston Texans on October 13. This is their second home game loss in a row. Come on. Pick yourselves up.

People thought it would be a tight game, with back to back scoring, especially since Quarterbacks Patrick Mahomes and Deshaun Watson are so similar. And the speculation was correct, although it didn’t look like it in the first quarter and the end of the game was not what Chiefs fans expected or wanted. The Texans jumped out of the starting gate discombobulated but managed to tighten up their loose strands, the Chiefs- not so much.

The Chiefs put up 7 points on the board pretty quick, with a 46-yard toss to Tyreek Hill. The Texans were a little in shock at the offense of the Chiefs- which was one of the best in the NFL in 2018. The Texans fumbled the ball on the first play, allowing the Chiefs to recover it and bring it down the field. Even though the Chiefs didn’t make another touchdown (it might’ve changed the ending), they did make a 3-point field goal, which put the score to 10-0 in the first few minutes of the game.

It was safe to say ‘Houston we have a problem’ for the Texans at that point as the Texan coaches realized they were going to have to adapt and overcome to win this game. In the first quarter, the Texans put a 3-point field goal on the board, and the Chiefs got another touchdown and field goal before the first quarter ended, putting the score to 17-3.

In the second quarter, the Texans caught their rhythm and began dominating the game, putting 6 points on the board within minutes. When Kansas City got the ball back, it was quickly intercepted- the first interception of the season for Patrick Mahomes. And from that moment onwards to the end of the first half, the ball bobbed back and forth between the two teams.

The Texans got two touchdowns and two 1-point field goals before the end of the second quarter.

The Chiefs managed to get an interception from Deshaun Watson. Unfortunately, the offensive line didn’t hold, and Mahomes was rushed (as he was throughout the game). Mahomes tried to throw to a receiver, but a defensive lineman from the Texans hit his throwing arm, causing him to fumble the ball and giving it to the Texans.

In the first half, the Texans made five penalties, and the Chiefs made 9. Combined, it equaled 14 penalties, which was the most in any first half of a game so far this season. The Chiefs have managed to get double-digit penalties in two consecutive games now- possibly what’s cost them the win these past two games. At halftime the score was 23-17 with the Texans in the lead.

In the third quarter, it looked like the Chiefs would pull off a win, as they usually do. They worked to get a touchdown and a field goal, putting them in the lead by one point, 24-23. Houston got the ball back and ran to the Chief’s endzone, but before getting a touchdown, Chiefs Charvarius Ward intercepted the ball.

The Chiefs could not get another point on the board during the game, however. In the last quarter, the Texans had the ball and got a touchdown and another two points.

The Chiefs got the ball back with about two minutes left on the clock, their last chance to at least tie the game and bring it into overtime.

Unfortunately, their offense was unable to drive the ball down the field, and the Texans won 31-24. It’s safe to say both the Chiefs defense and their offense need to work on their game.

Patrick Mahomes, Chiefs QB, completed 19 of 35, threw for 273 yards, threw for 3 touchdowns, threw one interception, and had one carry for -1 yard.

Mahomes reaggravated his ankle again, something that’s bothered him every game since the beginning of the season. There seems to be no rest for him until the Chiefs Week 12, unless he wants to sit out a game.

Tyreek Hill, after a clavicle injury in Week 1, played in the game, the first game he’s participated in since week 1. Hill caught two of the touchdown passes, making it his sixth game with multiple receiving touchdowns since 2017.

The next team they’re going against is the Denver Broncos. The game will be held at Sports Authority Field on October 17 at 7:20 pm in Central Time. Will the Chiefs pull together and get another win or not?