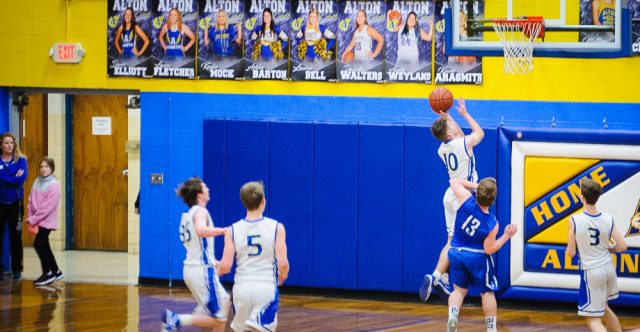 ALTON, MO - FEBRUARY 11: Alton Comets Rylan Steele (#10) trying to make a two-pointer despite a defender trying to stop him on February 11, 2020 at Alton High School Gym in Alton, Missouri. (Photo by Curtis Thomas/AltonMo.com)

Alton, Mo. – On Tuesday, February 11, the Alton Comets boys’ basketball team went up against the Bakersfield Lions. Alton’s High School choir started the evening by singing the National Anthem before the Junior Varsity game began. The Comets won both the Junior Varsity and Varsity games. You can go here, to read the article about the varsity game.

The points started off rapidly with the Comets taking an early lead. The Comets kept the lead through the entire game. Jacob Smith got a free throw and got one point. The points then went back and forth between the Lions and Comets. The Lions got four points and the Comets got six points. The Comets then got five back-to-back scores, the score was now 15-5. The Lions got another free throw shot and got another point. The Comets once again burned the Lions getting seven in a row points. The score was 26-6 with the first quarter ending.

The halftime score was 38-20 with the Comets still in the lead. During halftime, John Montgomery won the Comet Halftime Shootout and won himself a free pizza.

In the second half, the Comets kept the Lions to only 11 points, while the Comets scored 25 points. There was only one free throw and that was by Rylan Steele from the Comets. He got two points. The Lions got two back-to-back points before the third quarter ended. There wasn’t much action in the fourth quarter but the Comets did get five points. The final score was 63-31 with the Comets winning.

The Comets will go up against the Van Buren Bulldogs on Friday, February 14, at Van Buren, Missouri.