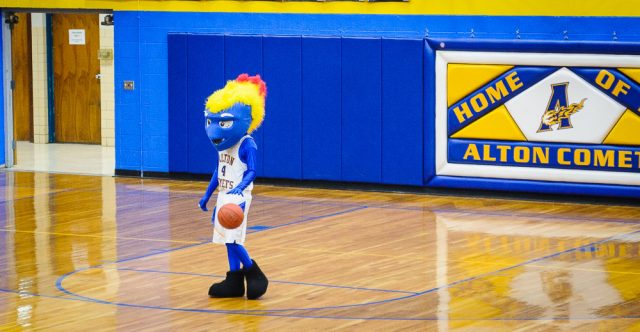 ALTON, MO - FEBRUARY 11: Alton Comets mascot (#4) gets ready to give the ball to a youngster in attendance who will try and get the Comet Halftime Pizza Shootout on February 11, 2020 at Alton High School Gym in Alton, Missouri. (Photo by Curtis Thomas/AltonMo.com)

Alton, Mo. – On Tuesday, February 11, the Alton Comets varsity boys’ basketball team went up against the Bakersfield Lions. Alton’s High School choir started the evening by singing the National Anthem before the Junior Varsity game began. The Comets won both the Junior Varsity and Varsity games. You can go here, to read the article on the varsity game.

The Varsity came out and had their game. The Lions got the ball first but didn’t get any points. Cainan Heck from the Comets got the first points. Cole Summers, from the Lions, got a free throw and got two points, the game was tied 2-2. Alton then got four points and the Lions got two points. Drew Clary and Colby Kernodle, both from the Comets, got two points each. A timeout was taken and the score was 11-4 with the Comets in the lead. Bakersfield then made three points from free throws and Alton made one point from a free throw. The score was 12-7 with the Lions catching up. The Comets then got seven points before the second quarter.

Jed Montgomery a player for the Comets, got a three-pointer, but the Lions got a two-pointer and a free throw. The Comets had a twelve-point lead over the Lions with the score being 22-10. Dalton Sharp, Comets, got a two-pointer.  The Lions got four points and the Comets got six more points. The score was 30-14. Cainan Heck, Comets, got one free throw point. The Comets then proceeded to make seven back-to-back points before a timeout was taken. The score was 38-14 with the Comets still in the lead. After the timeout was taken, the teams went back and forth in making points. With only a couple of seconds left, Cole Summers, Lions, threw an approximately half-court shot and made it!

The score at halftime was 42-23 with the Comets in the lead. Newt won the Comet Halftime Shootout and also won himself a free pizza.

The Comets made four three-pointer shots to begin the third quarter. One of the teams then took a timeout. The Lions also got a three-pointer. The score was 54-26. Colby Kernoodle and Cainan Heck got two points each for the Comets, two from a free throw. The Lions also got a free throw and got one point from it. The score on the scoreboard was 58-27. Brandon DeWolf and Drew Clary, Comets, got themselves four points and three points. The Lions got another free throw and made one of the two shots. Cason Kinder and Cainan Heck, Comets, made three points and two points before the third quarter ended.

The score at the beginning of the fourth quarter was 70-28. Cason Kinder and Rylan Steele, Comets, made five points together to begin the fourth quarter. The Lions made two points before the Comets once again score three points. The rest of the game consisted of three free throws from the Lions, they got two points from them, and one free throw from the Comets which they got two points. The final score was 80-32 with the Comets winning.

The Comets will go up against the Van Buren Bulldogs on Friday, February 14, at Van Buren, Missouri.