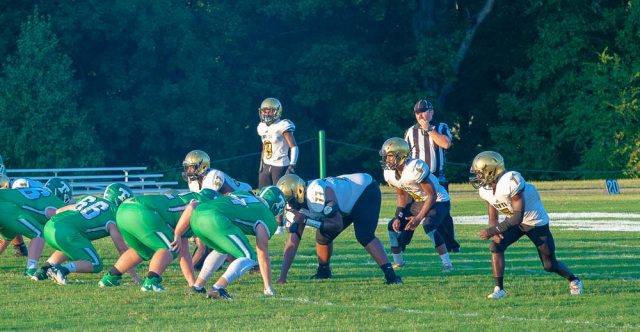 The Indians got their only touchdown of the first half from quarterback Trayvon Thomas (#5). The Indians tried for a 2-point conversion and got it. The score at the end of the first quarter was 14-8.

Touchdowns and an Interception

In the third quarter, the Bobcats kicked off to the Indians. The Indians did not grab the ball quick enough, so Chris Cray, (#7) linebacker for the Bobcats, fell on the ball. Thayer went down the field and Jayce Haven racked up another touchdown. Jayce Haven did a jump pass to Jordan Madden, (#25) running back for the Bobcats, for the 2-point conversion. The score was 38-8. Hayti’s next drive was not good and ended with an interception from Jayce Haven. Haven was down on the field after the interception with what seemed like cramps. He shook it off and continued to play.

Haven threw a 34-yard pass to Lane Grimes, (#24) wide receiver for the Bobcats. Haven threw another nice pass for 18-yards to Jordan Madden to about the 5-yard line. Jordan Madden had his first touchdown of the night with a 5-yard run. The extra point was good. The score was 45-8.

Runs and Points for Hayti

Trayvon Thomas had a 17-yard run, 16-yard run, and 6-yard run that ended in a touchdown. Trayvon Thomas threw the ball to one of his receivers for the 2-point conversion. The score was 45-16.

The Bobcats were set back to their first down and twenty-five. Jayce Haven fought for a couple of yards and threw an incomplete pass. Haven dismissed the few yards they had gained compared to the yardage to gain and ran 36-yards for a first down. In another play further along the drive, Haven dropped the snap but still managed to get seven yards.

Touchdowns for Both Teams

Haven pitched the ball to Jordan Madden for a twelve-yard touchdown yard.  Kale Willison, (#3) the kicker for the Bobcats, got the extra point. The score was 52-16.

The Indians tried to get one more touchdown before the game ended, and they did. Trayvon Thomas (Indians) ran six yards for the touchdown. Thomas threw the football to his receiver but the pass was incomplete. The final score was 52-22 with the Bobcats moving on to the State Quarterfinals.

Game results and plays courtesy of the K-Country 95 Radio.