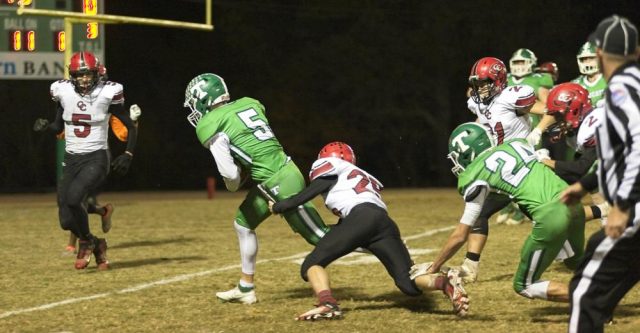 The Bobcats received the kickoff. Their drive ended up with a trick punt. Jayce Haven, (#5) punter for the Bobcats, received the snap, but instead of punting the ball, he threw it to Jordan Madden, (#25) running back for the Bobcats. The throw was incomplete.

The Bobcats got the ball back. Jayce Haven threw a nice 30-yard pass to Lane Grimes, (#24) wide receiver for the Bobcats, for a first down. On 3rd and 7, Haven threw to Grimes again for a 25-yard pickup.

The Greyhounds got the football back. The Bobcats’ defense held them to a punt. Jayce Haven threw to Landry Pitts (#10 for the Bobcats) for 16-yards. Haven followed that up with a 15-yard run. Haven threw to Pitts again for some more yards.

Jayce Haven ran into the enzone for the Bobcats’ first points of the game. The Bobcats acted like they were going to go for the extra field goal. Instead, Haven pitched the ball to Jordan Madden, who threw it to Lane Grimes. The pass was caught but Grimes was already out of bounds when he caught it. The score was now 8-6.

On the Bobcats’ drive again, Jayce Haven ran six yards into the endzone for another touchdown. On the 2-point conversion, Haven threw to one of his receivers, but the pass was incomplete. The score was now 12-8.

Nearing the end of the first half, Jayce Haven threw a pass. The pass was intercepted by a Greyhounds player. The Greyhounds quarterback threw a 45-yard completion to his receiver. The score at the half was 12-8 Bobcats.

The Greyhounds received the kickoff in the third quarter. On a handoff, a Greyhounds player ran twenty-seven yards for a first down. A penalty made them go 1st and 20.

Landon Madden, (#14) defensive back for the Bobcats, sacked the Greyhounds quarterback for a loss of seven yards.

On a throw from the Greyhounds quarterback, the ball was intercepted. Due to a penalty, the fourth down was repeated. On the next play, Chris Cray, (#7) linebacker for the Bobcats, intercepted the football in the endzone. The Bobcats drive ended in nothing.

When the Greyhounds got the ball back, they made their way to the endzone. Windsor’s quarterback threw to #2 for a touchdown. The 2-point conversion was unsuccessful. The score was 14-12.

The Bobcats were forced to punt the ball. When the Greyhounds got the ball back, they were 4th and 23; they punted the ball.

Jayce Haven handed the ball off to Jordan Madden for a run of twenty-five yards with 4:30 left in the game. The Bobcats went to get a first down while being 4th and 7. Thayer did not get the first down.

The Greyhounds quarterback was sacked by Landon Madden for a 2-yard loss. Windsor was once again forced to punt by the Bobcats defense.

The Bobcats were feeling the pressure right then. Jordan Madden received a snap and ran for 10-yards. On the next play, Jayce Haven scrambled around the backfield to buy time for his receivers to get open.

Kick for a Win

The Bobcats went for the kick. If Kale Willison, (#3) kicker for the Bobcats, made this field goal, it would be from thirty-two yards away. With 0:11 left in the game, Willison kicked the ball. The kick was blocked by the Greyhounds. The final score was 14-12 with the Greyhounds winning.

Game results and plays courtesy of the K-Country 95 Radio.