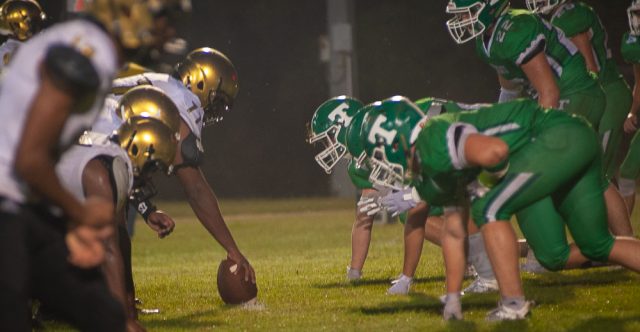 The Indians allowed 18 points on average per game, and they scored on average 56.8 points per game.

The Indians went up against the St. Vincent Indians last Friday. Hayti beat them 54-41. [3]

The Indians have had only one close point game; that game was against the Bobcats. Hayti only won by a margin of two points. The Bobcats’ only loss came from the Hayti Indians, with the end score being 30-28.

The Bobcats’ last opponent was the Caruthersville Tigers (3-5). The Bobcats beat them 57-18. Thayer mixed their game-plan with trick plays, runs, throws, and extra-point attempts.

Points During A Game

The Bobcats have averaged 38.9 points per game while only allowing the opponent to score 9.3 points on average.

In an interview with Jackson Willison, a running back for the Bobcats, he said,

“I mean, that’s a long way’s away. We just gotta take it one game at a time, but I think if we play well and we keep our heads on straight, there’s nothing that can stop us but ourselves.” [7]

In an interview with Jayce Haven, the Bobcats quarterback, he said,

“I think our biggest obstacle every week is ourself just making sure we’re staying focused and make sure we’re not taking anyone lightly.” [8]

Confidence For The Next Game

Kale Willison, the kicker for the Bobcats, said in an interview with AltonMo.com,

“You can never take an opponent lightly, especially seeing as next week is the district championship.” [9]

The Thayer Bobcats will face off against the Hayti Indians at the Louis Bozman Field at 7:00 p.m., on November 13, 2020, in the District Finals. Whoever wins this game will go up against either the Mark Twain Tigers (6-6) or the South Callaway Bulldogs (7-3) in the state quarterfinals. [10]