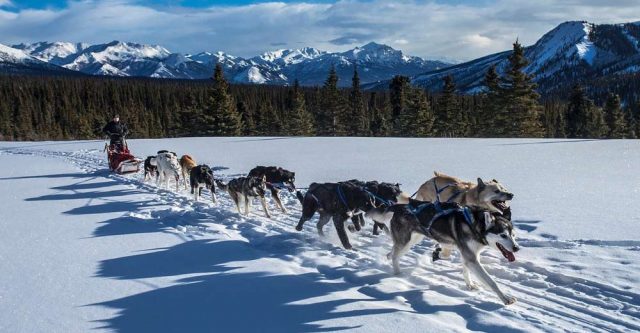 Alton, Mo. – The Iditarod Trail Sled Dog Race is underway at the moment. Starting March 8, mushers and dogs have been tackling the wilderness and snow on their way to get to Nome, Alaska first. This is the 48th Iditarod race. The racers have more additional challenges than in recent years.

The 2020 Iditarod started on Sunday, March 8, 2020, in Willow, Alaska, just north of Anchorage and is still going since none of the competitors have reached Nome yet. The ceremony for the race took place on March 7 in Anchorage, Alaska. This winter has been the snowiest for Anchorage and all of Alaska since 2011-2012 winter. Alaska has gotten 83.9 inches of snow as of March 9; that is more than the average snowfall of 74.5 inches.

People have been clearing a trail for the mushers and dogs to follow. In some places, the snow is 6 feet tall making walls along the sides of the trail. The teams will also have to face moose as they like to stick to paths, so they have more of an advantage on preditors. They will also have to face the subzero temperatures and more snow on the way.

Iditarod race director Mark Nordman said, “This year we’ve had a lot of snow. I won’t ever say too much snow. But it’s been a challenge to get the trail put in,” according to The Associated Press. [2]

The first team to cross the finish line is likely to reach Nome between Monday, March 16, and Wednesday, March 18.

The Iditarod is an annual sled dog race in Alaska. It first started in 1973 as an event to test the best sled dog mushers and teams. But today it is a highly competitive sport for teams and watchers alike. The race begins in Anchorage, Alaska to Nome, Alaska. It happens in the beginning of March and lasts about 8-15 days. The distance is about 1,000 miles long for the dogs and mushers to travel.