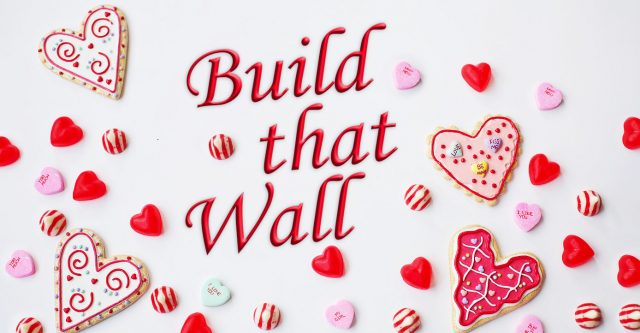 The owner of Edmonds Bakery in Edmonds, Washington was recently under attack for making a pink, heart-shaped, valentine cookie frosted with the words “Build that Wall.” Now, four days later, people from all over the country are ordering “Build the Wall” Valentine cookies.

Ana Carrera, a resident of Edmonds, Washington, visited Ken Bellingham’s bakery last Saturday hoping for a sweet treat. Instead, she was met with a “hateful” cookie in a display case. The cookie in question was a pink, heart-shaped, valentines cookie with the words “Build the Wall” frosted on the face of it. Next to it were other, pink, heart-shaped, valentines cookies which said things such as “Addicted to Love” only you” Cool Beans” and “Believe.”

Bellingham said that he’s been making this style of valentines cookie for years now. “Some are a little risqué, some are nice,” he said. “I’m back there trying to think of what to write on a cookie. I try to be funny.” [1]

Unfortunately, Carrera didn’t think his joke was funny. She took a picture of the display and posted it on Facebook saying that “It’s hard to see words like that,” she continued by telling how her parents had fled Mexico in the 80s, fearing drug cartels.

“We were born here, but my parents were the stories you see on the news of people crossing the border because they just want a new start,” Carrera said.

The Facebook post garnered a lot of attention. “People were just going off,” Bellingham said. “They don’t know anything about me and supposedly I’m some horrible person.” His store started receiving threats of being boycotted as well.

Bellingham apologized, posting on his companies Facebook page “I will not be making any more cookies of a political nature, but a narrow line of Love and Sweetheart and maybe Nice Butt.”

But now Bellingham has changed his mind saying that he’s protected by the First Amendment. “Am I supposed to be quiet because I can’t write what I want, or I can only write what they want or makes them happy? No. That’s not how it is. They can write whatever they want on their own cookie and I can do that on mine.”

The strange thing about social media and boycotting is that it doesn’t always work as planned. Although it puts the boycott in front of many peoples faces, not everyone will agree with the boycott. Instead, they’ll buy products to counter the effects of the boycott.

In North Carolina, some groups of liberals called for an economic boycott when the state approved their “HB2” or the “bathroom bill.” At first, it was looking grim with artists canceling their shows, companies stopping their expansion plans to that state, and some sporting events being moved out of state. But in the long run, NC saw record tourism and the state’s economy grew from the free publicity that everyone was putting up about them. [2]

The short of it is that protesting a company, place, or person on social media is sometimes like free advertising for them and doesn’t always work as expected.