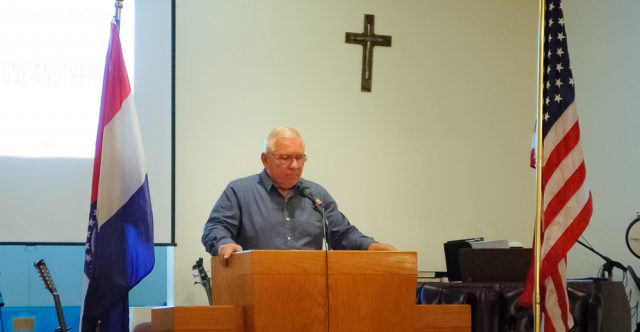 Alton, Mo. – The National Day of Prayer was once again celebrated. On May 2, 2019, residents gathered in Alton to pray for our governing officials. The gathering was planned for 12:15 p.m. This allowed local workers to gather alongside others, grab a quick lunch, before returning to work.

Rain all week did not damper the citizen’s patriotism. However, prayer was moved inside.

Initially planned for the Alton, MO courthouse south lawn by the flagpoles, the heavy rain moved the meeting indoors. Although last year the meeting went to the courthouse basement, confused people wandered around trying to find where the gathering was taking place. Although the Community Worship Center had several vehicles parked out front, that was not for the Day of Prayer. The Assembly of God Church held this event.

The theme this year was “Love One Another.” Pastor Charlie Trantham welcomed everyone. There were 35 dwellers who showed up, which was considerably fewer than last year. This was because residents didn’t know where or when to meet. The Boy Scouts’ honor guard presented the flags of the United States and Missouri. Then the national anthem was played.  President Trump’s declaration for the day was read aloud. Afterward, David Case spoke thoughts on 2 Chronicles 7:14. He also mentioned how one person could make a difference; we can make a difference. Then he led us in prayer.

Following prayer, the attendees were dismissed. No food was offered although it had been expected from prior years.

This was an unusual year. The rain came and kept the service from being outside. Various sources announced varying times of meeting. Some people even showed up at 1:00 p.m. for prayer. The only place mentioned was the courthouse lawn. Not meeting in the courthouse basement, it was anyone’s guess where to meet for prayer. Later no food was offered. All of these changes brought a disgruntled spirit of the attendees. Nonetheless, attitudes were pushed down as “Love One Another” tried to prevail.