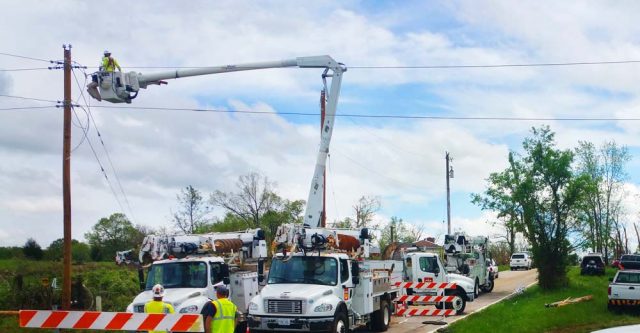 Rogersville, Mo. – On Tuesday, multiple storms broke out across the U.S. plains, birthing over two dozen deadly tornadoes in five separate states. The storms managed to leave a path of damaged buildings, downed trees and power lines behind them in every state- Missouri included.

In south-west Missouri, a possible tornado damaged at least a dozen homes in Ozark Missouri, which is located about 20 miles south of Springfield. Ozark Police Chief Tim Clothier has said that at least three injuries have been reported so far.

Other towns in southern Missouri also reported suspected tornado sightings. Rocky Comfort, Miller and Stella were all affected by the force of the storm on Tuesday evening. By Wednesday afternoon more than 27,000 homes were left without power in Texas, Arkansas, Missouri, and Oklahoma due to the storms.

Rogersville Missouri was also hit with heavy rain and wind, causing power outages to several homes. On Wednesday morning many officials went out to make sure people were okay and to fix any downed power lines in the areas.