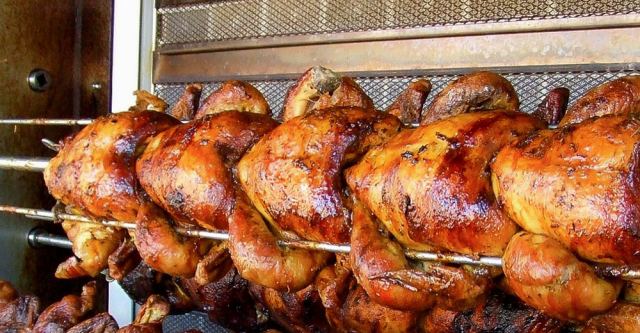 It is summertime. Not too many people want to cook inside- too hot. So outdoor grilling is the way to beat the heat. Do you get tired of burgers and hot dogs? How about chicken on the grill? Do you have a rotisserie? Have you ever tried to use it?

Growing up, my dad had a cage rotisserie. The chicken was higher from the flames, nothing falls into the fire, and basting can occur. How hard can it be? Well, I dragged spit and forks out from the barn to grill a perfectly moist chicken. It was a learning experience. Even following an online recipe brought unaccounted for challenges.

As with any grilling out, it is important to prepare the grill. As I wasn’t using the grill racks, I simply removed them. I assumed that would be all the preparatory work I would need to do. Less than one full turn of my chicken told me what I did not want to know. The propane grease tray was hitting, even stopping, my chicken from rotating. Thinking quickly, I stopped the process, removed the bird, with tongs removed the grease tray, replaced the bird, and began the motor again. Now the grill will work as designed.

I am aware of all the safety precautions I need to take before eating poultry ( washing, rinsing, salting). What I tried to think through was,’ How to keep my bird on the rotisserie.” As it cooks, legs and wings can fall off. I anticipated problems.

What do I have on hand to string the legs together, similar to a Thanksgiving turkey? Not string, it will burn. Wire? Sounded clunky. After ruling our mechanical wire, I finally decided upon bread ties- the kinds with wire in them. I realized that the paper would burn, but the wire should hold. It did, and it did. Using three, I made an efficient My son was ready with the fire extinguisher when he saw the paper on fire. I told him it would quickly stop.

After that,  I have the problem of the wings falling. Bread ties circling the entire chicken? No thanks. My teenage son stepped up to the plate. Toothpicks. I groaned thinking that they, too, would catch on fire. He was betting that the meat would ‘harden’ before the toothpicks burned. He used approximately 4 per side. The result was wings that did stay on the bird and toothpicks that did catch on fire.

Just thinking about basting a chicken made me think of a Butterball turkey, only better because I was making it. However, after the bread ties fires and the toothpicks on fire, why did I expect the melted butter slathered over the grilling chicken. What does butter do to a fire? Yes, flames!!

The chicken did cook in an hour. The skin was black. We tore it off. The inside meat was juicy and flavorful. Next time, I’ll remove racks, tie up the bird, and only use 1 set of burners to slower cook the chicken. My home was cool in teh evening and I had a decent meal.