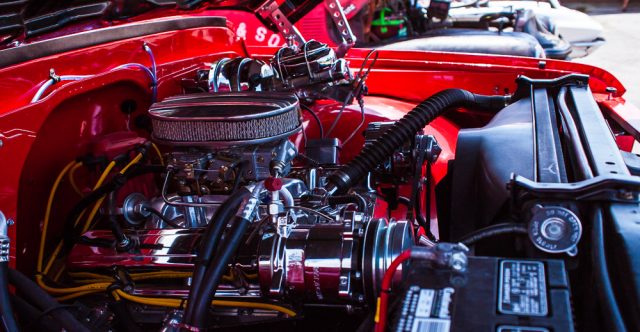 Alton, Mo. – Today the Alton Senior Center holds their 2nd annual car show and fish fry in an effort to raise money for renovations on their building. With Sandy McCasland directing the event, there are several cars in attendance and many people in the parking lot who are enjoying the fried fish and admiring the cars.

The cars rolled up to the Senior Center parking lot around 9 a.m., all shined up and ready to go. The hot noonday sun beat down on the black pavement, heating the air and causing the few who are brave enough to remain outside to stand, huddled together, in the limited shade. Today there are 12 cars in total (scroll to bottom for pictures), up from the three that attended the car show last year. There’s a variety of vehicles in attendance, from a 1953 Roadster to a 1966 Mustang, with everything in between- including a 1934 pink Coupe and a cherry red 1968 Chevy Pickup.

Although all of the car owners are excited about the small car show, some are wondering if they even stand a chance without the show being divided up into different classes- like bigger shows typically are. Ed Smith, who has shown his car for the past three years(a 1990 Chevrolet 4×4 pickup), is a little disgusted with how so many people are attracted to “little cars” instead of the trucks. “Little cars can’t do anything, they sit so low;” Smith says, gesturing at a cream-colored Sting Ray parked, glowing in the sun, nearby. “Who would want one of those?”

That’s the neat thing about attending the larger car shows, there might be more cars that show up, but you’re divided up into so many classes that in the end you’re almost guaranteed to win something. And everybody likes to be a winner; which makes competing in a small town car show that puts everyone in one class and determines the winners by popular vote an undesirable place to be. But as Marshall Taylor, who’s competed in quite a few car shows, large and small alike, over the past several years, says: “The little shows count just as much as the big ones.” Taylor goes on, “so many people go to big shows because that’s where big trophies are. It’s about winning to them.”

More to it Than Winning

“I’m just here to have fun.” Taylor, who happens to own a bright pink Coupe (the only pink car in the lot) says, and although he might be here to have fun, he’s also here to win. Winning becomes evident when he’s given the first place trophy by McCasland after the ballots are counted.

Smith is also here to have fun, a few years ago he fixed up his old 1990 truck and drove it to a local car show- he’s been having fun ever since. “It gives me something to do on Saturdays,” he claims, although after the show he plans on going to Legit Speedway in West Plains to catch a glimpse of those cars. “I’ve spent enough money there to buy another truck. Maybe two. And a house,” Smith laughs. He ends up not placing at this show, but he’s a good sport about it and already has plans for another car show at the end of the month.

Car shows aren’t just fun for the owners of the cars either. Carmeal G., an elderly lady, sits with me in the air-conditioned Senior Center before McCasland announces the winners. “That 1955 Chevy reminds me of what my Grandpa used to drive!” Carmeal exclaims before going on to talk about another truck that looks like the one she used to own when she was younger. I ask her if she has a car outside, and express my surprise when she says she does. “Oh! I didn’t put it in the show; I drove it here!”

Mr. Shehorn gets the second place trophy and is thrilled by it. He might’ve already known he was going to win, with his little red 1953 Roadster appealing to the heart of many, but he’s so humble, thanking everyone around him and beaming, in the most genuine way, at the audience when he receives his trophy.

Larry Burnham is the last to be called up; he had brought his 1967 Pontiac which he built, in his spare time. It was tough for Burnham, who arrived in the sweltering heat and did a little last-minute polishing to his car. But he’s happy he placed at all, calling it “a hot day out,” and leaving shortly after the awards ceremony.

Another one Bites the Dust

“The Car Show went fairly well,” says McCasland, when I meet her at 2:59 p.m., one minute before the fish fry and car show is officially over. “We did not meet our goal,” she refers back to their $2,500 goal that was initially in place for helping refurbish the Senior Center, “but it was okay. And as long as we cover the cost of fish, I’ll be happy.”

McCasland plans on moving the car show up to the second week of September next year. Today she competed with a nearby Route 66 car show for cars and wants the day to be clear the next time she hosts the car show.

“Will the Senior Center have another car show and fish fry next year?” I ask, even though I already know the answer, this is something she’s passionate about. “Oh, yes, definitely,” McCasland replies with a laugh.