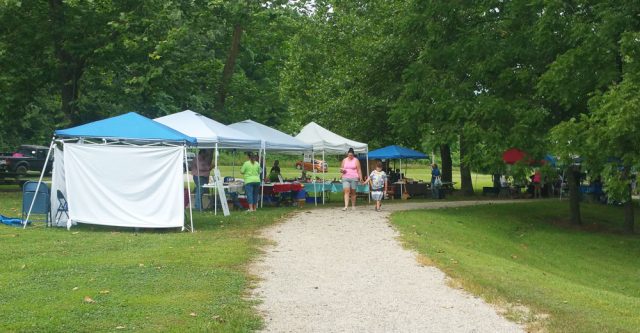 Alton, Mo. – Saturday, July 17, 2021, brought a sunny, humid, and hot day, but that did not stop a massive crowd from coming to the Oregon County Farmers Market.

Cars were parking further and further back as there was no parking farther on. There were dozens of people buying the fresh produce.

There was a variety of things being sold. Among them were fresh produce, baskets, baked goods, wood burnings, big bubble wands, a puppy, and lots more. Some of the produce sold included cucumbers, yellow squash, lots of tomatoes, blackberries, corn, and a lot of other produce. Some tomatoes were 4 for $1.00. The corn was 3 for $1.00. Baked goods were also sold at the Farmers Market. There were pies, cookies, brownies, fried pies, and others. Some of the pies were being sold for $10.00. Jams and eggs were sold as well. And, no worries, the puppy was sold.