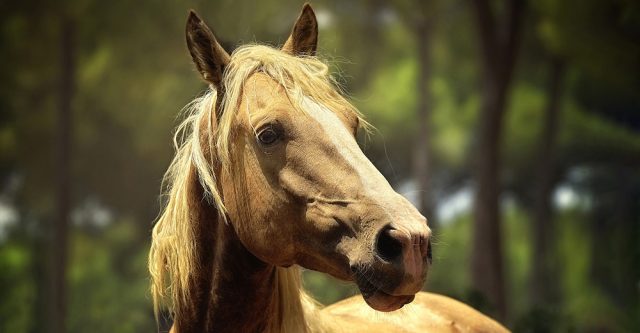 Echo Bluff State Park in Eminence Missouri has had several wild horses visiting the park in the past few years. Although visitors to the park enjoy feeding the horses, the animals have damaged vehicles as well as raising concerns about children getting seriously injured.

Echo Bluff State Park has been home to several wild horses until recently when concerns about people’s safety at the park were raised.

Early on, wild horses would frequent the parking lot of Echo Bluff, they were a popular attraction for visitors and the horses themselves enjoyed the attention they received from the tourists. Carolyn Dyer, secretary of Missouri Wild Horse League, blames the people for providing the horses with continuous food for the horses sticking around the park. “There was a constant source of food there, with people feeding them,” Dyer said. [1]

This is where the safety issue came up as park employees and Dyer worried that one of the horses would seriously injure a child. “I’ve seen pictures of people letting their children feed them out of their hands. With a child, their whole hand can fit inside a horse’s mouth. We’re glad nothing happened.”

Although no injury has ever been reported so far, Dyer said that one of the horses chewed up a motorcycle seat and that several cars have received paint damage from the horses. One horse even learned how to open the lodge’s front door by pressing the handicap button with its nose.

Because of future safety concerns, the Wild Horse League rounded up the wild horses and found people willing to adopt them and give them a real home.

The roundup at Echo Bluff was fairly simple, “we just rounded up the whole herd,” Dyer said. “We set up a round pen and put some feed and hay in there to get them used to coming into the pen. The pen had a gate with a trigger. There were seven altogether, though three were the ones that were being aggravating.” There was only seven horses at the park and all of them managed to get adopted by Missouri horse lovers.

There still are approximately 30 wild horses in four or five herds that still roam Shannon County, where traffic signs caution motorists to watch for them.