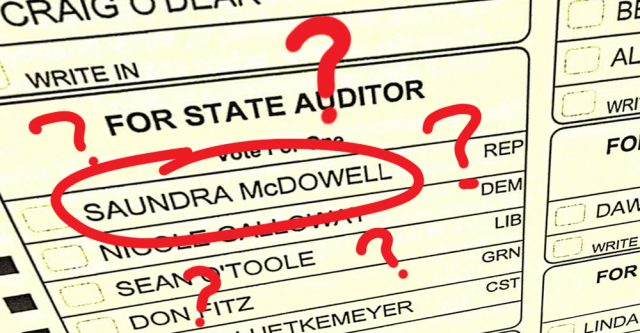 Thayer, Mo. – The Missouri Republicans seem confused as to what to do with their primary elections winner, Saundra McDowell. After elections on August 7, 2018, the news released the information that she has not met all of the requirements to run for state auditor and she is therefore not qualified.

According to Ballotpedia and other sources, the Missouri state auditor must be at least thirty years old, a United States citizen for at least fifteen years, and a Missouri resident for at least ten years [1].

Susan McDowell does meet the first criteria; she is thirty-eight years old. Secondly, she is a citizen of the  United States. The third qualification is the one in question. Has she been a resident of Missouri for the necessary ten years? The sad answer is, “No.”

Records show, and she admits, that she didn’t become a resident of Missouri until 2010. Doing simple math, that does not qualify for ten years. She says she meets the residency requirement,” Because she intended to be a Missouri resident…then she is eligible to serve as auditor.”

However, are intentions good enough to disregard the law? There is a point at which countries cease to be “civil.” That’s usually where people fail to consider the long-term effects of their decisions. The citizens of a country think about others before themselves. Otherwise, known as delayed gratification. We delay our short-term pleasure for long-term gain.

McDowell is behaving like a selfish child in this regard. She has no faith that if she sits out this election that she’ll have this opportunity again. So she pushes the boundaries of the law. Kinda’ like Bill Clinton and his answer to a federal judge, “Depends on what your definition of is, is.”

Now there is also discussion regarding her residence in Kansas as late as 2013. Where did she consider home? If she cannot keep her story straight and complete before elections, what will happen after elections?

Also, why the immediate rush for office instead of waiting the two years for residency?

These questions were asked by the staff at AltonMo.com of Saundra McDowell’s office, and no response has been issued as of this date.

The questions remain. Could voters elect one who flagrantly disobeys the law? Would voters excuse her lawlessness and past personal problems only for a pretty face? Will the people of Missouri hold her accountable, being a lawyer, as she plans on holding each separate county accountable to our Capitol? Or will she do the correct thing and bow out of the general elections, handing the Republican Party nomination to her runner-up?

These and many more questions remain to be answered, but, nevertheless, McDowell is showing who she is by pushing the gray areas of the law for her immediate gratification. Stay tuned until election day, November 6, 2018, or sooner as news arises.