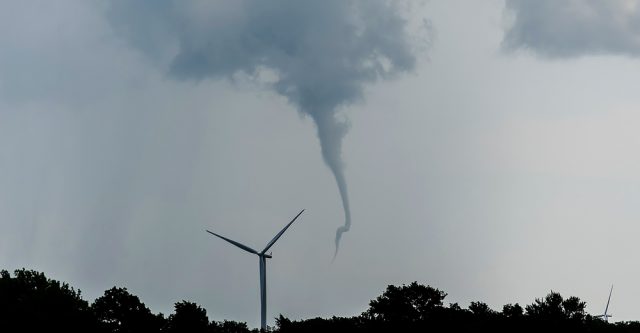 A tornado beginning as a funnel cloud

Today is the first day of spring. While tornadoes do not have a specific season, they do appear more during different parts of the year. Here is what you need to know about tornadoes.

Tornadoes are unpredictable. They turn every which way, they may last a couple seconds, to an hour, they give very few hints to when they will form. There are a couple of ways to know if a tornado is forming.

First, if a strong thunderstorm is coming your way, you might want to watch out. Second, before a tornado hits the ground, usually a wall cloud forms. A wall cloud, in scientific terms, is a large, rotating cylindrical extension from the base of the supercell. A wall cloud will look like a wall of clouds. But sometimes you don’t see the wall cloud because precipitation blocks it out.

How A Tornado Forms

A tornado is a narrow funnel of powerful, rapidly whirling wind that stretches from a cloud to the ground. Sometimes a tornado forms inside a mesocyclone. A mesocyclone is the rotating updrafts found in many supercell thunderstorms. A supercell is the strongest type of thunderstorm.

A tornado watch is when conditions are right for the formation of tornadoes. A tornado warning is when either a tornado has been reported or favorable winds for a tornado have been spotted on the weather radar.

If you live in the Tornado Alley, you are prone to have more tornadoes than the rest of the world because warm, moist air moves northward from the Gulf of Mexico, as cooler, drier air moves eastward from the Rocky Mountains.. The Tornado Alley is the Mississippi Valley and the eastern Great Plains.

If you live in an area more prone to tornadoes or you’re experiencing a thunderstorm, watch the weather for tornado warnings and watches. If a tornado watch is reported, get in the basement of your house or a storm shelter. If you don’t have or aren’t near one, get onto the first floor of you house in the middle of the house. Don’t be near windows. If you are in the Tornado Alley, keep a supply of food, water, first-aid supplies, a radio, and anything else you think is necessary.

Remember: tornadoes can form anytime of the year so be prepared.